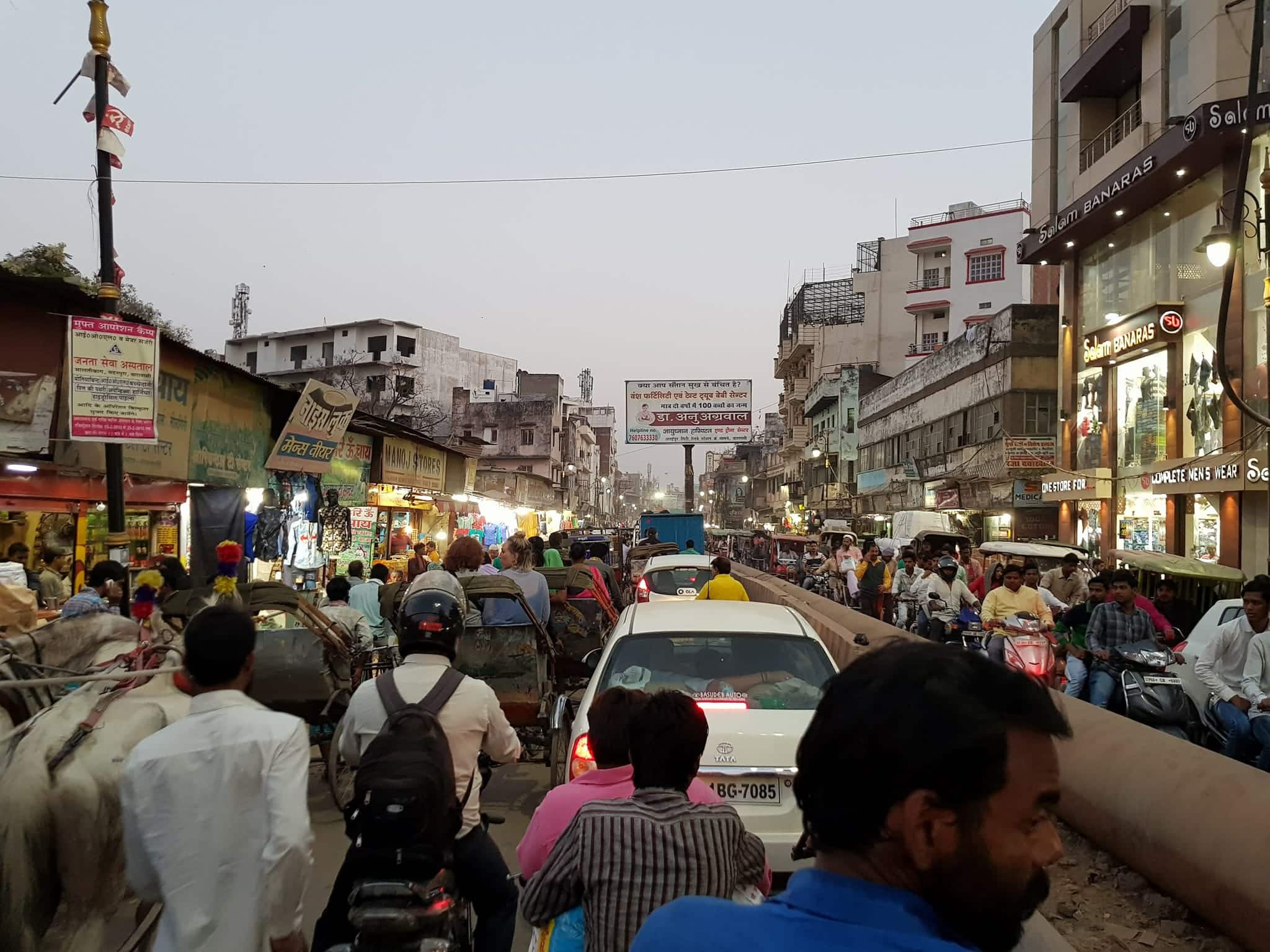 If you think travelling through Melbourne or Sydney in peak hour traffic is chaotic, then you’re in for a real shock travelling in India.

With its bustling life, overflowing traffic, cacophony of beeping horns, cawing of crows and even the odd mooing cow – travelling to India is indeed a sensory delight, and a cultural shock. There is a reason they say “India is an assault on your senses” – everyone of your senses will be heightened by the sights, sounds and smells around you.

And while India can be inspirational, astonishing and enlightening for first timers, it can definitely be challenging and overwhelming as well.

So, before you travel to India here are seven travel tips to prepare you for the best (and the worst!) of travelling through this fascinating country.

<<Want to see India for yourself? Join Two’s a Crowd on a solos only tour through India onboard the luxury Palace on Wheels train. Details here!>> 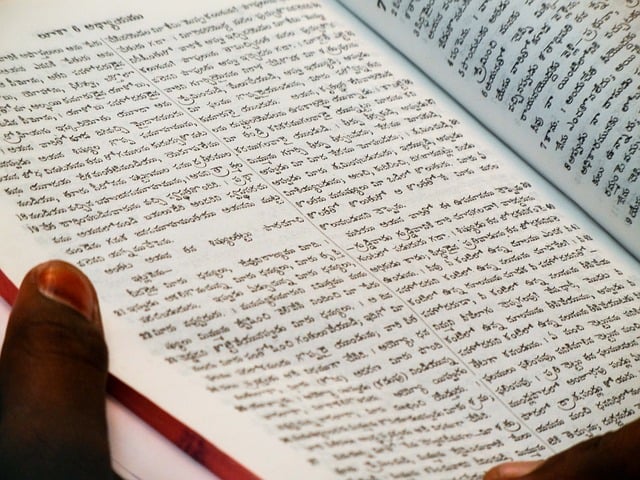 With 22 official languages spoken across the country (not including the dialects spoken in remote areas), India is culturally and linguistically diverse. Although English is spoken in major cities, it is worth learning some basic words in Hindi as it is generally understood across the whole country. Here are a few words and phrases that might be helpful (and might just save you in emergency situations) –

Shukriya or Dhanyawaad – Thank You!

Acha –This is one of those words that has many different meanings, from ‘good’ to ‘ok’ or ‘alright’

Ek Bottle Pani Dedo – Give me one bottle of water. 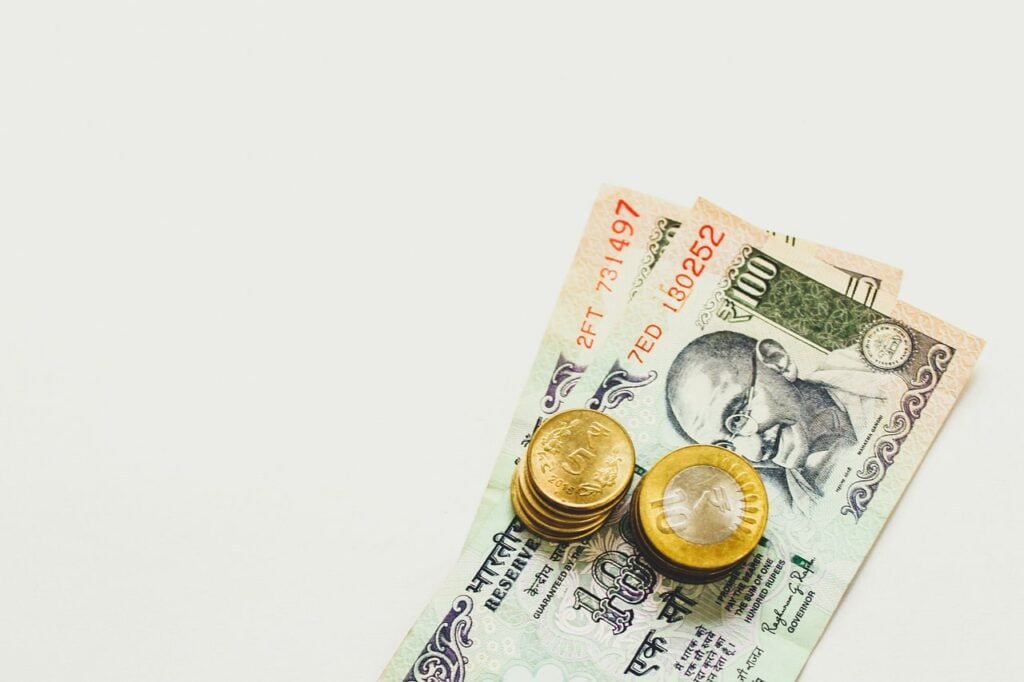 Stay within a budget

India might seem cheap compared to almost everywhere else you might travel, but cheap is not free. It’s good to have an idea of the basic costs for local transport, typical meals and accommodation. Mid-range hotels tend to provide the best value for money in India. Boutique stays and Airbnb vacation rentals are common. Using trains and Volvo buses is much cheaper than taxis.

And if you are planning to shop while sightseeing, learn to haggle! Not only will you save money, but it can be a bit of fun for you and the shop assistants (just stay calm and be pleasant but firm).

While we’re on the subject of money, it’s important to think about where you will be traveling to during your trip. While it’s easy to exchange money at airports, banks and travel companies or access international banks and ATMs in the cities; these services are not so readily available in villages and remote areas. So, always have a reasonable amount of cash (preferably in small denominations of 10s, 50s and a few 100s).

Tip: It’s also worth having small denominations of notes in the cities, particularly if you plan to take rickshaws or buses or want to buy goods at local markets. 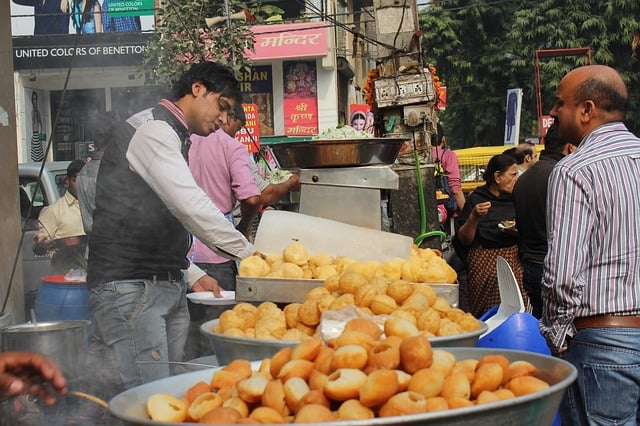 Street food? Don’t even think about it!

It’s important to pay attention to what you eat in India – you’ve no doubt heard of ‘Delhi belly’! And while they may be tempting, the street food carts generally don’t follow local health codes so eating from them is an easy way to get sick.

India has a plethora of good, local and cheap restaurants so stick to recommendations from locals or guidebooks. Afterall, you don’t want to get sick on day one and spend the rest of your trip stuck in a hotel room because you ate something you shouldn’t have. Also avoid filtered or tap water, it’s not common in India to drink water straight from the tap like it is here in Australia.

If you do get sick, don’t panic. A dodgy stomach is common for first timers in India, as it can take time to adjust to the local food and all those new spices. While there are pharmacies in and around cities in India, it is a good idea to pack some Imodium, and ask your GP what other medicines you should carry.

Hint – If you really want to try the street food, stick to freshly peeled fruits and vegetables and food that has been either freshly boiled or fried. We’d recommend only eating food that is cooked in front of you. Also stick to bottled water and always check the seal on the cap – if it’s broken, don’t buy it. 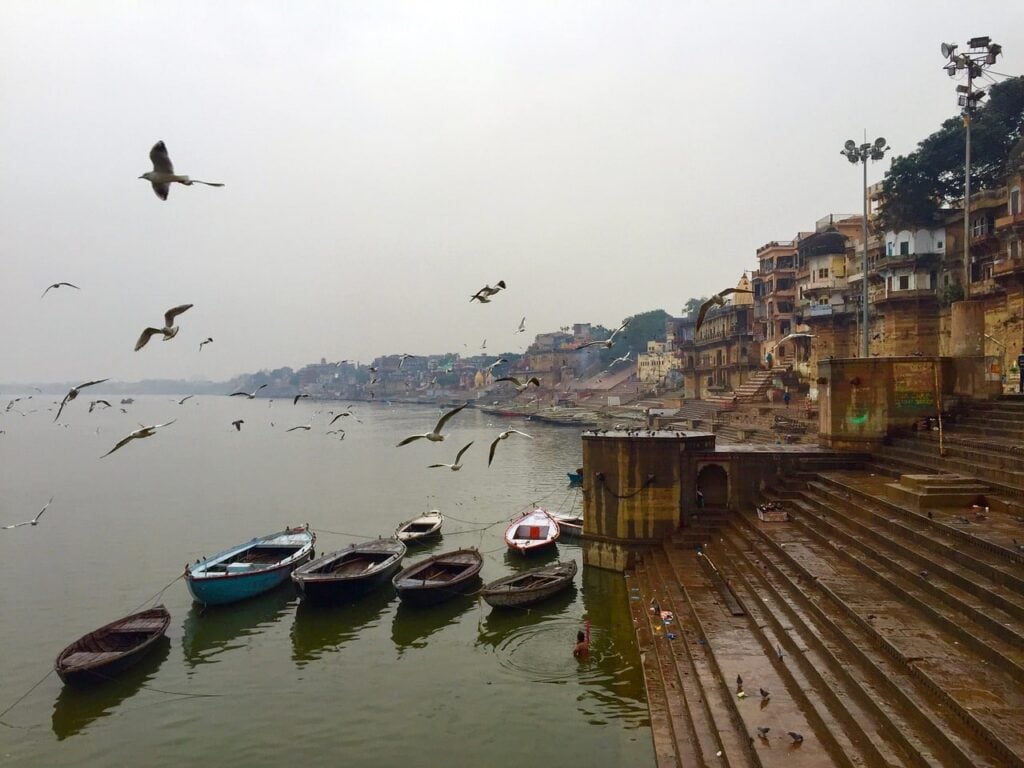 This tip is true for anywhere in the world, not just India. It’s important to know the weather conditions of the month you are traveling to help you pack accordingly. In India, temperatures can range from a scorching 40 degrees Celsius in Summer to 15 degrees in Winter, do your research before stuffing your suitcase.

Each region in India has different climatic conditions, so there’s always somewhere worth visiting, no matter the time of year. The Western Himalayas, such as Ladakh, and hill stations like Darjeeling, Shimla and Manali are at their best in summer, while popular tourist destinations like Mumbai, Kerala, Hampi, Rajasthan, Agra and Varanasi are best visited in winter. 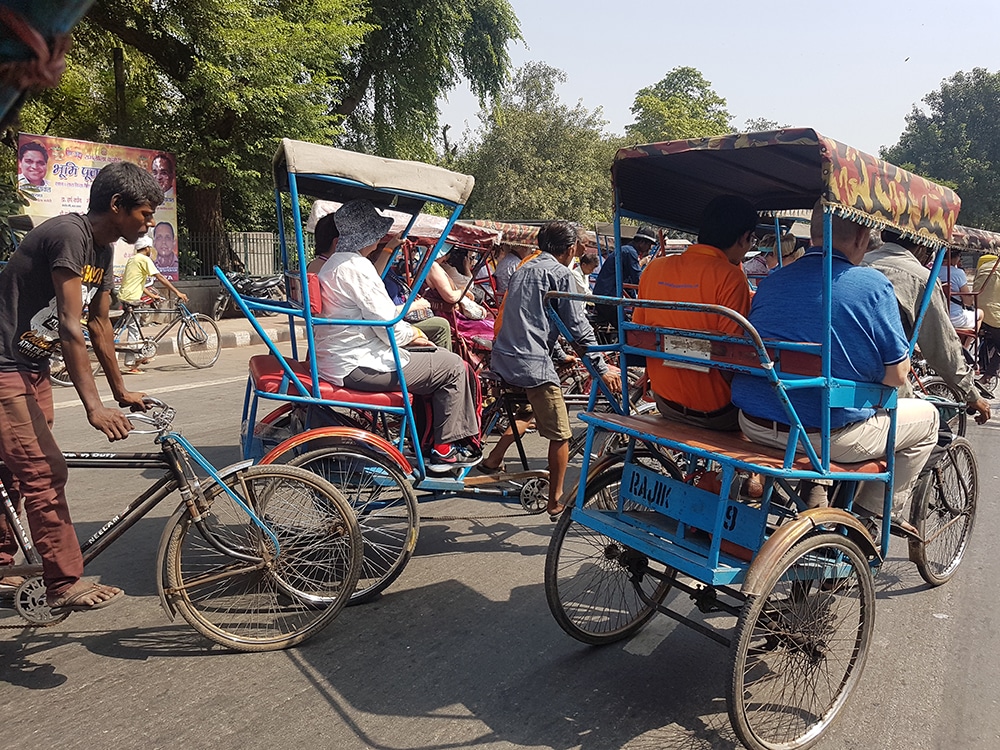 Know how to get around

Getting in and around India is easy with its large transport network. Local buses, taxis, rickshaws, trains, flights… you can choose any medium of transport that suits your needs. Just make sure you plan ahead and know the costs and schedules to avoid any hassle or confusion at the last minute.

Also remember that India is a big country and distances between towns can be longer than anticipated, particularly when factoring in traffic and road conditions.

You can catch local taxis and auto-rickshaws from just about anywhere in the cities, including bus stops, railway stations and airports. Uber and Ola are also available in the major cities. 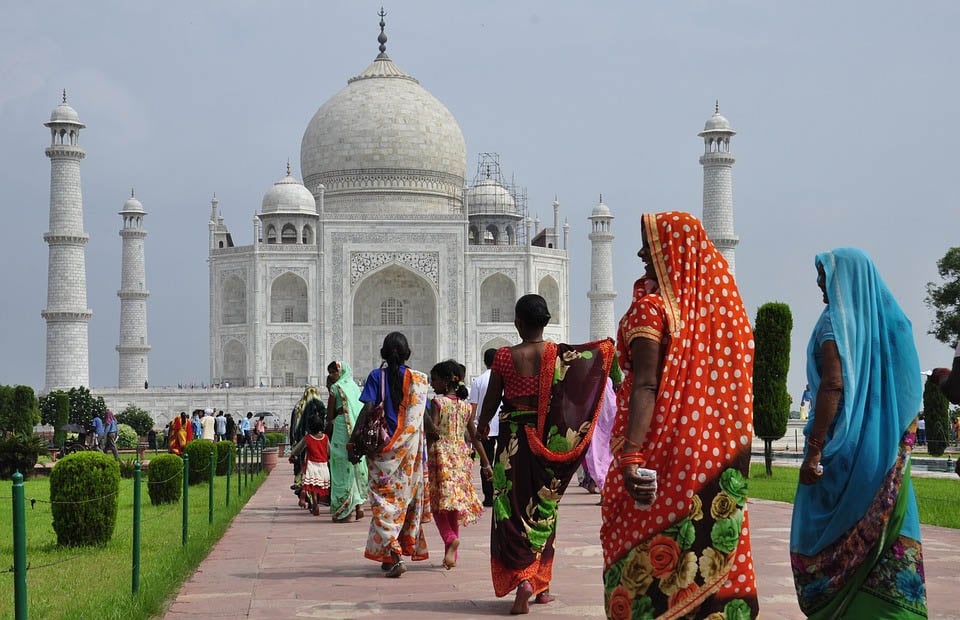 Be respectful to the local culture and know the customs/traditions

India has a relatively modest culture. While you might be able to wear anything you want in the the cities, many mosques, temples, gurudwaras (Sikh temple) and other holy places have strict dress codes. Always remove shoes outside and cover your head with a scarf. In Sikh temples, men are also asked to cover their heads. Dress modestly while visiting small towns.

Insider tip – India is forgiving of those who aren’t familiar with their culture, but you’ll make a good impression if you know these basic nuances.

“Don’t go out in the dark” is a pretty common saying in India. And while it might seem obvious, it’s one of many things you should know to avoid mishaps and subtle dangers.

Muggings are far more common at night, so make sure if you do go out for dinner or a show you take an uber or get your hotel to arrange a reputable taxi service for you and don’t linger in the streets.

Also, be careful of what you take with you. Carrying a lot of cash is rarely a good idea in any country, but pickpocketing is notoriously common in India.

Be sure to keep a photocopy of your visa and passport handy as it can be used for emergency situations. Plus, make a note of emergency numbers. In India, the all-in-one emergency number is 112. Otherwise, for police – 100, fire-101 and ambulance-102, Women and child safety – 1090.

With India’s 1.2 billion population, street beggars are not an uncommon sight, particularly around bus stops and railway stations. Avoid giving money to beggars. If you really feel like helping, give water or food instead.

Emergencies and mishaps can happen. It’s better to be prepared in advance. Get travel insurance before you go that covers health issues, accident, travel delays, damaged or lost luggage, cancellation and other possible eventualities.

Insider tip – Avoid deals that seem too good to be true. Government shops are the easiest way to avoid scams.

India can be a challenging destination, but if you remember these tips and are prepared for your journey, we guarantee you’ll leave the country feeling rejuvenated, elated and more spiritually aware. Most of all, it’s a country that will weave its charms around you and leave you wanting more.

Want to see India with Two’s a Crowd? Check out our Palace on Wheels and South India tours.

By Gunjit Arora, a digital marketing specialist from Delhi, and Diane Squires, a writer and tour host with Two’s a Crowd.