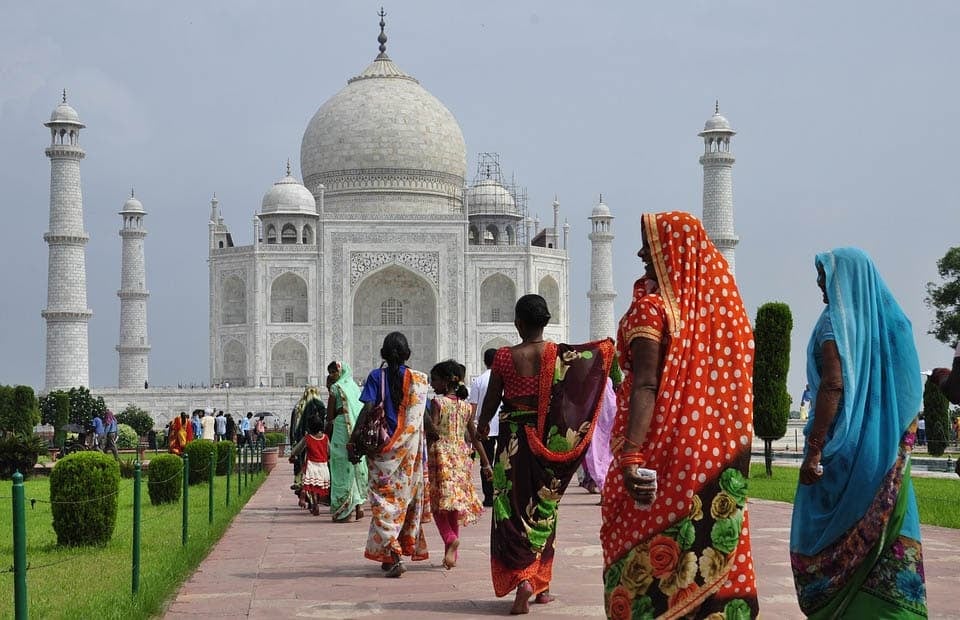 You’ve no doubt heard it said before that India is an ‘assault on the senses’. It’s true. Every sense will be awakened, heightened as you step off the plane and into this fascinating country.

It is the seventh largest country in the world, the second most populous country and the largest populated democracy in the world, but all that aside, from a travel perspective there is simply so much to see and do that knowing where to start can be at best confusing, at worst absolutely daunting.

So if you’re thinking about heading to this fascinating place, we’ve pulled together the five places you shouldn’t miss on your first trip to India.

Don’t be daunted by the vastness of the land, or the images of city crowding and chaos. India is the kind of country that weaves a spell so tight you’ll be thinking about the amazing sights and smells long after you’ve returned home.

<<Want to see India for yourself? Join Two’s a Crowd on a solos only tour through India onboard the luxury Palace on Wheels train. Details here!>> 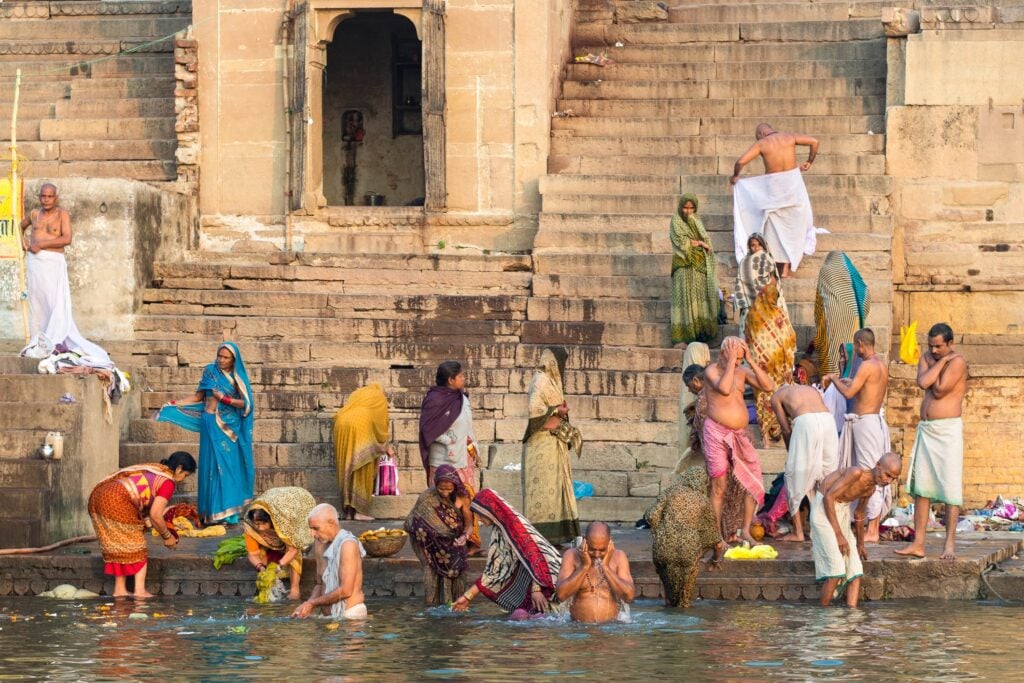 There is a magical moment when you first set foot on the Ghats that wind along the river’s edge and look out on to the Ganges in Varanasi, particularly if you arrive at sunrise.

The early golden light adds a certain kind of beauty to the river here, which only enhances the spiritual sense of the place.

At first light there is also a stillness in the air, a calm over the steps leading down to the Ganges. The steps might be full of tourists all trying to take an early morning cruise along one of the most famous rivers in the world, but there is a hush, a respect of the sacredness of the site.

Throughout the day the 88 Ghats that line the Ganges in Varanasi are alive with activity. Each Ghat has a different focus, a different reason for being. Add to that the touts looking for business, the traders looking to sell their wares and the men here to bathe and the women doing the household washing in the river and you have a thriving river bank teeming with energy.

From the water you get to compare the differences between each of the ghats and really appreciate their beauty. The Manikarnika Ghat, one of the more intriguing, sits next to the primary cremation ground and is the most sacred of the ghats. The pyre here burns constantly as people come from all across India to cremate their loved ones. The surrounding buildings are tinged with the smoke from the pyre, lending an eerie feeling to this part of the Ganges.

By night the ghats light up in a carnival like atmosphere, so you see, really, it doesn’t matter what time of the day you are here, there is always something intriguing to see. 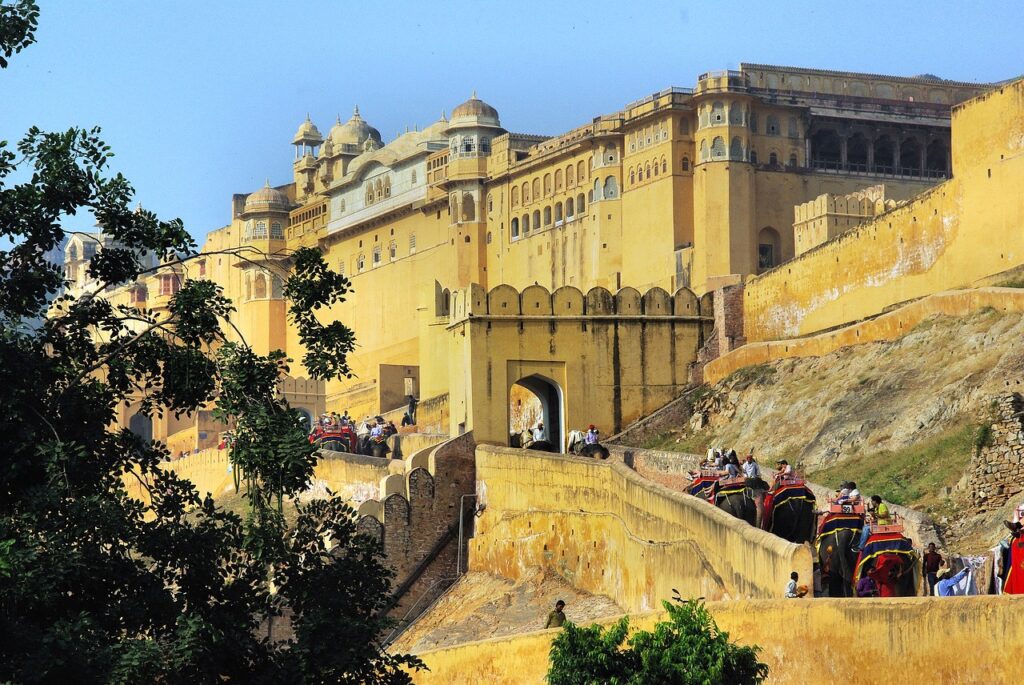 There are few cities in the world that compare with Jaipur, a city of remarkable history and cultural buildings and three – that’s right, three – forts watching over it. Indeed at the beginning of this month, UNESCO listed Jaipur ‘the pink city of India’ as a World Heritage site.

The city centre was painted pink in 1856 to celebrate Prince Albert’s visit to the city and it has been known as the pink city ever since.

The colour may have faded, and some of the walls begun to crack, but this city will weave its charms on you.

Jaipur rounds out the western Golden Triangle, which includes Delhi and Agra, and is home to two UNESCO World Heritage sites – the Jantar Mantar and the stunning Amer Fort.

Jantar Mantar is a unique series of 19 astronomical instruments built in the 1700s, including the world’s largest sundial, while Amer Fort is a village in its own right and sits high on a hill just outside Jaipur.

And you see that’s one of the things that makes Jaipur so interesting, aside from the pink walls, it’s the diversity of the city’s attractions.

Don’t miss the Hawa Mahal, the Palace of the Winds. This unique structure – in a country known for its unique structures – forms a striking vista from the street. Built in 1799 by Maharaja Sawai Pratap Singh, the building is said to contain 953 small windows and has a kind of beehive look about it.

Streets, in a big city? We know what you’re thinking, but stay with us on this one. The streets of Delhi, of India in general, are simply fascinating. You could lose hours wandering the streets of the old town – Chandni Chowk. All that traffic, trucks, buses, cars and tuk tuks dressed up in the finest colours, streamers and lei, sharing the road with oh so many people and sometimes even cows, yes cows. They’re sacred, of course in India, so the locals very patiently wait for them to pass by.

The streets are alive with activity, colour and movement. There’s food stalls and market stalls and just, well, an abundance of life, of simply being in that place.

Chandni Chowk was once the grandest marketplace in India. You can still buy silver, saris.. any manner of things here really, and the food is said to be some of the best in Delhi.

While you’re wandering the streets in Chandni Chowk be sure to take in Red Fort and the Jama Masjid, just two of the stunning monuments that make up the 100s of monuments across Delhi. 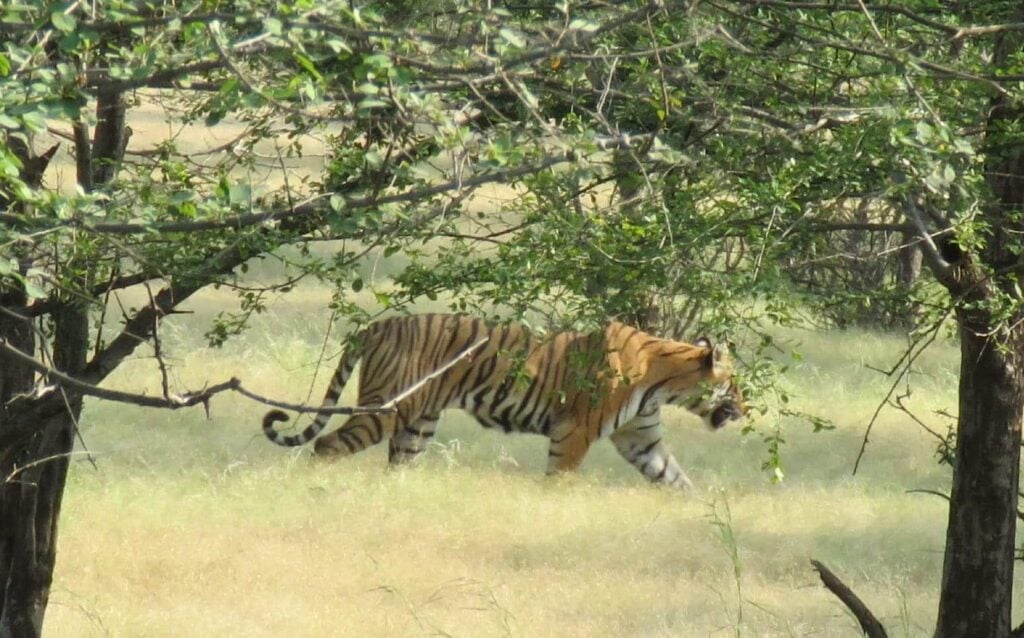 There are few places left in the world that you can see tigers in the wild. And India just happens to be one of them. There is a real thrill in seeing wildlife in its natural habitat. You’ll sit for hours watching, waiting, looking deep into the forest for signs of wildlife. And that first moment when you get a glimpse of these majestic creatures will stay with you forever.

Of course, there’s more to Ranthambore National Park than the tigers, if you’re lucky you’ll also get to see leopards, monitor lizards, chameleon, Indian porcupine and Indian foxes, just to name a few of the diverse wildlife here.

And as well as the amazing wildlife, simply spending a day in the serenity of the jungle provides a welcome respite from the chaotic streets of India.

You didn’t really think we could run a list of places to see in India and not include the Taj Mahal did you?

This is one of those icons you’ve seen countless times in photos, in ads, on television and in movies but we promise nothing can prepare you for the real thing. To stand in front of the reflection pond and see the sheer size and beauty of this famous landmark is stunning in every sense of the word.

And as you draw nearer and see the perfect lines; the sleek, cool marble finish and vast expanse of the building and surrounding grounds will leave you speechless.

Built as the ultimate love letter by Shah Jehan to his favourite wife Mumtaz Mahal in 1631-48, the Taj Mahal is known as a ‘teardrop on the cheek of time’. Inside this elaborate mausoleum are the tombs of Shah Jehan and Mumtaz Mahal. Most of the beauty of the site is from the gardens inside the walls, but outside the main buildings.