Nine things not to miss in Myanmar
Uncategorized 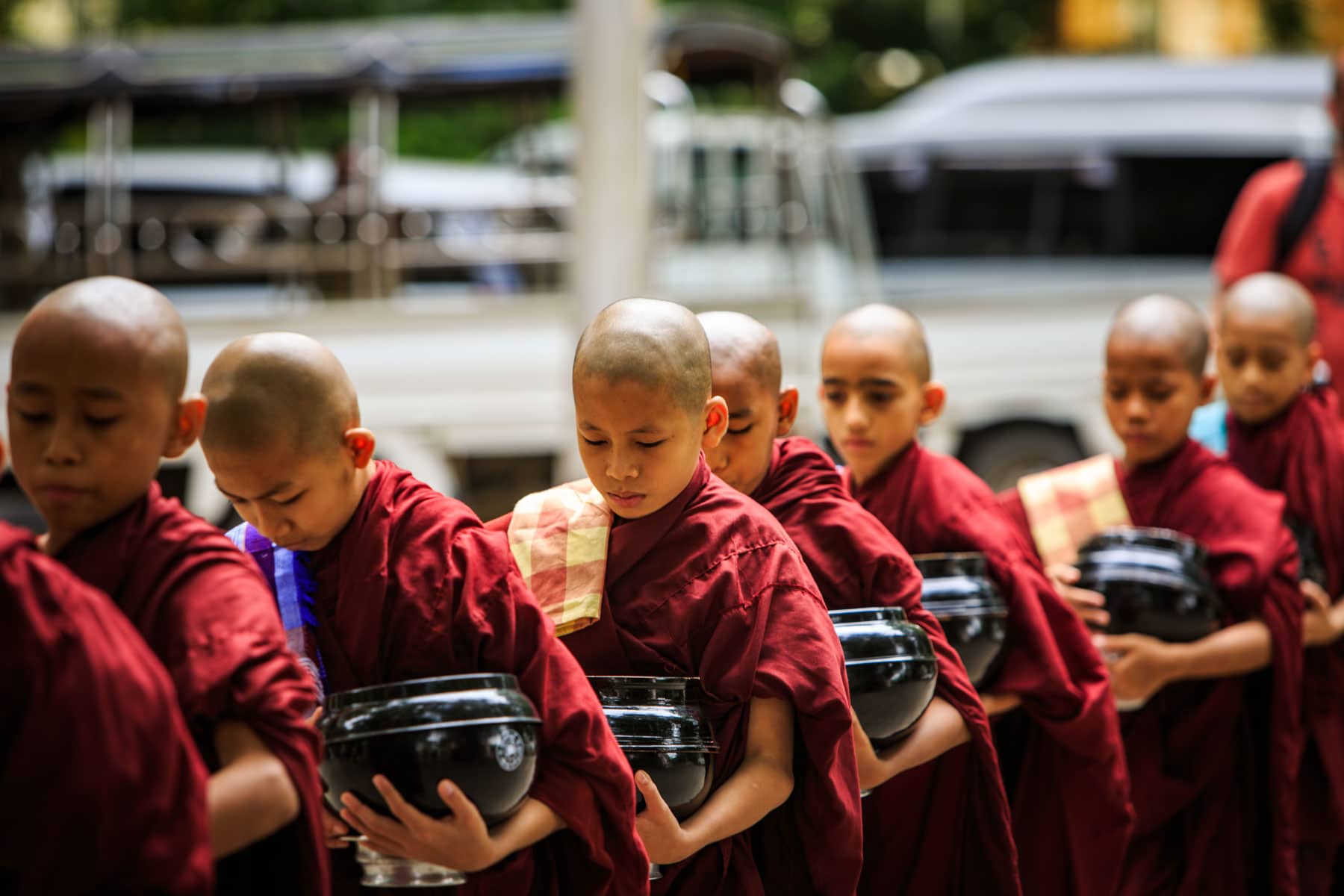 As it emerges from bitter ethnic disputes and military unrest, Myanmar is slowly becoming an intriguing destination for travelers of all interests.

From rustic landscapes to magical lakes and Buddha-filled caves, not to mention Bagan, a city dotted with more than 3500 temples, Myanmar is a country of stunning sites, intriguing culture and, of course, an interesting history.

Bordered by India and Bangladesh, Thailand and Laos and China, it’s probably not surprising that the country is built on a mix of Asian influences. But Myanmar, formerly known as Burma, has a unique outlook; its major tourist attractions, people and vistas are unlike anywhere else in the world.

But where do you begin? Most adventures to Myanmar will start in the country’s capital, Yangon. But don’t just finish there, Myanmar’s delights are scattered throughout the country and to get a full appreciation of the country, it’s best to explore well beyond the capital.

There is simply so much to see that it would be a shame not to explore this unique part of South-East Asia.

We’ve done the hard work for you to uncover 10 things not to miss in Myanmar. 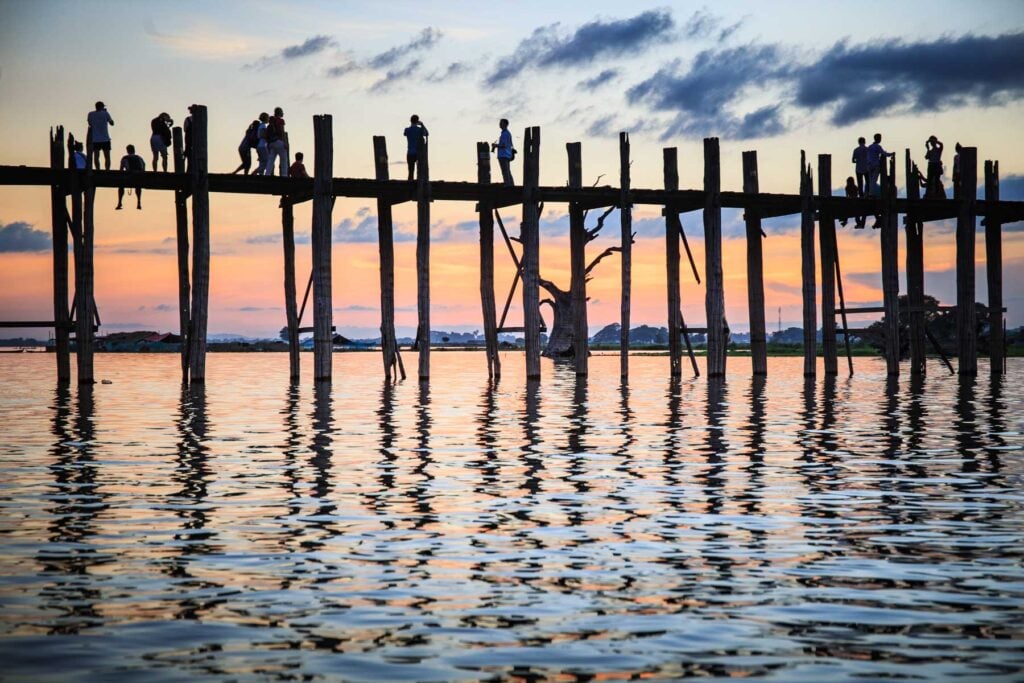 This is not just any old bridge, though it is, of course, an old bridge. U-Bein Bridge stretches some 1.2 kilometres across Taungthaman Lake, near Amarapura and not far from Mandalay. It is the oldest, and at one time, the longest teak bridge in the world.

According to the website Atlas Obscura, the bridge was built using the remains of a Royal Palace.

The bridge, which contains 1000 pillars, was completed in 1851 and took three years to build.

Today the bridge is a major tourist attraction for the area and the most popular time to visit is during sunset when mother nature adds to the spectacle of the bridge with a stunning colour show that emphasizes the starkness of the teak structure.

Take a boat out to the middle of the lake, climb the steps up to the bridge and walk back across its rickety platform.

There are more 3500 temples in Bagan (3822 remain of the 4446 originally built between the 11th and 13th centuries), so really, unless you plan on spending a good few years in the country it’s unlikely that you’ll ever get to see them all.

But make sure you don’t miss the Ananda Buddhist temple. It’s been described as the “Westminster Abbey of Burma” and dates back to 1105AD. In the centre of the temple are four standing Buddhas, facing North, South, East and West. Each Buddha stands about 9.5 metres tall, all finished in gold inlay.

The temple is one of the most beautiful in Bagan, jeweled by a gold spire that sits at the top of the temple and is visible across the plains. In an area of awesome sites, this is one not to be missed. It’s a striking scene set amidst the arid plains of Bagan. 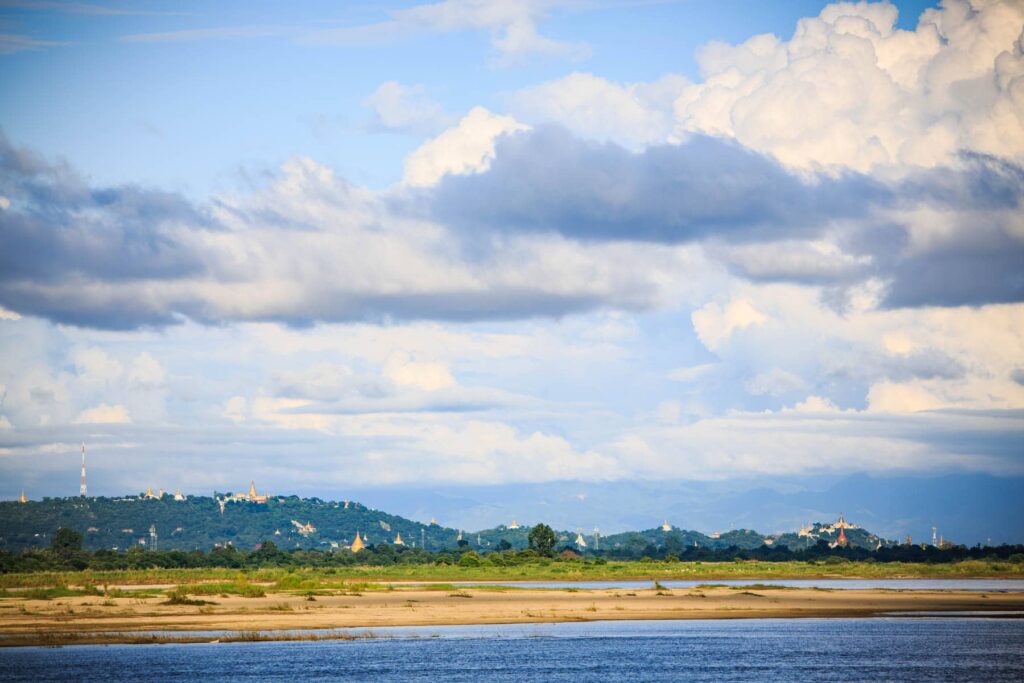 Imagine a mountain range rising up before you, leafy green vegetation covers the mountains. Now imagine that mountain range is dotted with gold pagodas and iron walkways. That is Saigang Hill.

Home to numerous Buddhist Monasteries, and located on the banks of the Irrawaddy River, Sagaing Hill comprises of a number of interesting stops rather than a single attraction.

The main pagoda is the Soon U Ponya Shin Pagoda, which is a series of buildings connected by a covered staircase that runs along the side of the 240-metre-high hillside.

It’s not just the sites on Mingun that will dazzle you, it’s the queue of local ‘taxis’ that await you as you pull up to the shores. And when I say taxis, I mean old school taxis – bullock and carts. You’ll have a driver and they’ll all compete for your attention to take you to the main highlights.

As well as the Mingun bell – the third largest bell in the world (this one’s at ground level, so you can stand inside it while someone rings it if you choose) – and the unfinished pagoda, which was intended to be the largest in the world, Mingun is home to Hsinbyume Pagoda.

Hsinbyume Pagoda is one of the most interesting looking pagodas you’re likely to come across. It’s surrounded by layers of white ‘waves’ that seem to wind their way up to the central white pagoda. It looks somewhat like a very elaborate and historic maze.

The scene is spectacular (just remember to wear your sunglasses and take your camera.). 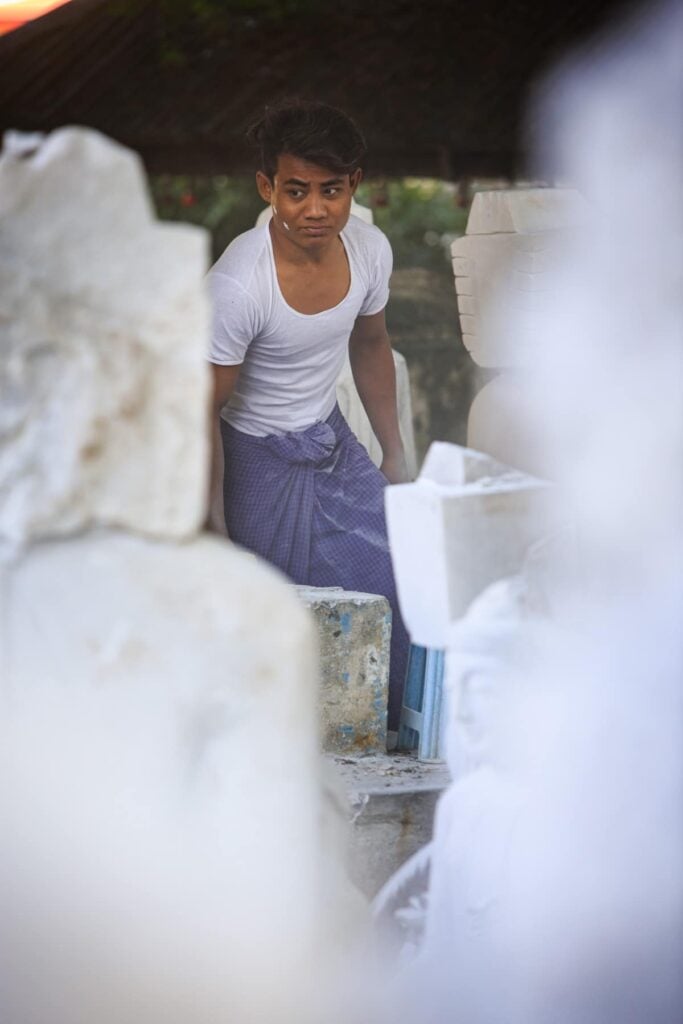 Mandalay is Myanmar’s second- largest city and the last royal capital of Myanmar. If you’re here early you can take in an Alms Giving Ceremony with the Monks – a once in a lifetime spiritual experience.

They say that Myanmar’s true culture is best seen in Mandalay and the city has more than its share of sites to keep any traveller engaged. From gold pounding, to the last royal palace of the Konbaung dynasty, from the stunning views and sunsets of Mandalay Hill to the marble polishing and iron casting districts.

As you’ve no doubt figured out by now, Myanmar doesn’t do things by halves. Pindaya is a series of caves, only one of which you can enter, but that cave contains 8000 images of Buddha. That’s right – 8000 statues of varying sizes all depicting Buddha.

The statues date back to the mid-1700s and people – both lay people and country leaders – continue to donate images to the caves. The cave itself is about 490 feet long, so it’s an easy walk amidst the Buddha images. 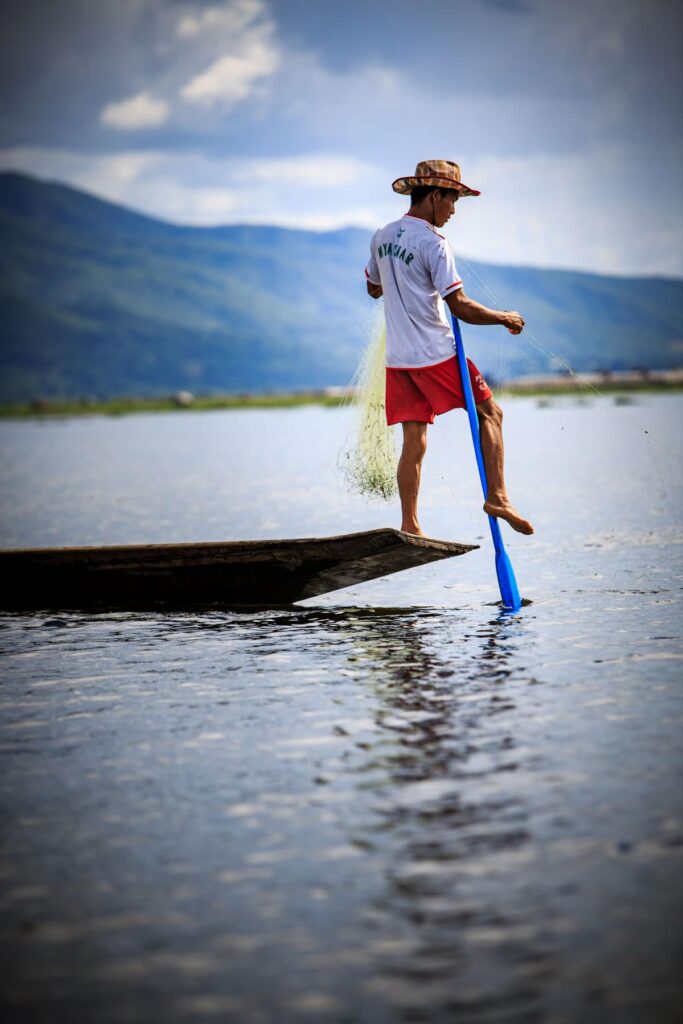 Like Mandalay and Bagan, Inle Lake is full of surprises and sites to visit. You might think you’re visiting the lake just for the lake itself, and while the views are stunning and it is a very serene location, there are so many interesting things to see here.

From the Phaung Daw Oo Pagoda, to the lotus and silk weaving crafts of Inn Paw Khone village, from the floating village of Ywama to the crumbling 17th century pagodas at Indein on the western shore of Inle Lake, the lake really is a hive of activity.

Oh, and don’t miss the fishermen and their unique style of rowing their boats with one leg while they fish with large nets. It’s an intriguing sight. 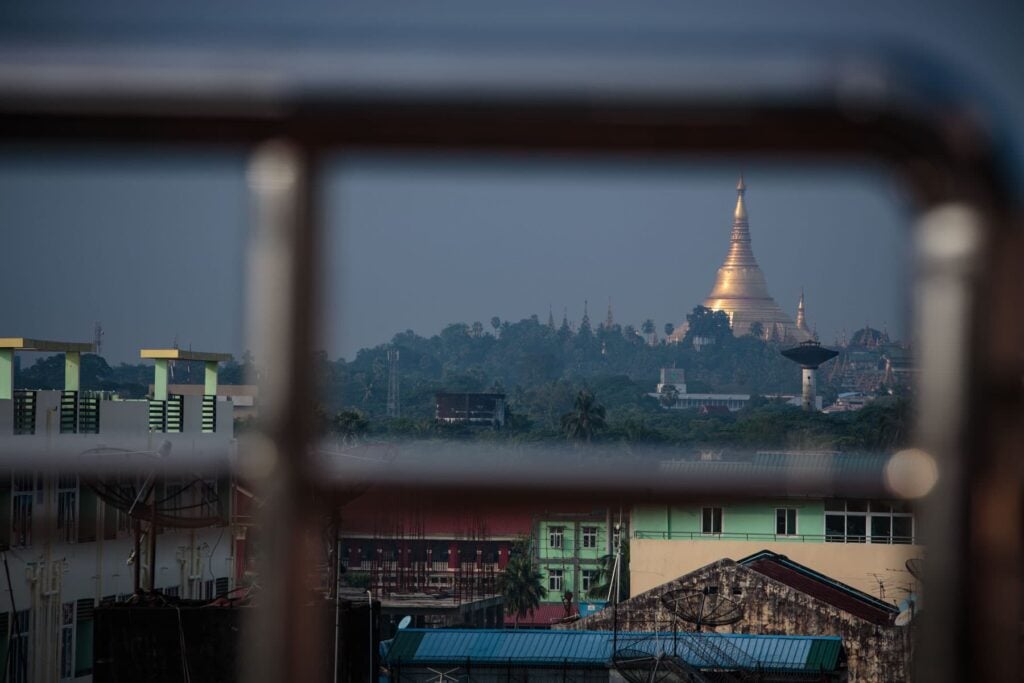 We haven’t talked much about Yangon, and it’s not because its bereft of sites to see. There’s plenty to see and do in the country’s capital and one of the most popular sites of all is the Shwedagon Pagoda.

You’ll see the glinting gold pagoda towering over the city’s skyline from just about anywhere in the city.

The 99 metre pagoda is the most sacred Buddhist Pagoda in Myanmar as it is said to hold the relics of previous Buddhas – the most famous of which are strands of hair.

The Pagoda is encrusted with 4531 diamonds, including a 72-carat diamond at the top and features a series of shrines throughout the grounds.

Give yourself plenty of time here to take it all in.

The colonial hill station of Pyin Oo Lwin, was a summer retreat during British rule. Its altitude of 1,070m and relatively cool climate allowed the British ruling class to escape the heat of Mandalay and southern Myanmar. During that era, the town was called Maymyo (meaning ‘May’s town’ in Burmese, after a British colonel who was stationed there), and it is still sometimes referred to as this today.

One of the gems of this areas are the gardens, officially named National Kandawgyi Gardens, the botanical gardens were opened in 1915 and are still beautifully maintained. They are home to a wide array of flora and fauna, including dedicated flower shows and wildlife such as gibbons and takin, goat-antelopes that are native to the Himalayas.

Want to see this for yourself? Check out our solos only Magical Myanmar tour over Christmas here.

Diane Squires is a writer and tour host with Two’s a Crowd.