5 Foods you Should Try in Myanmar
Uncategorized 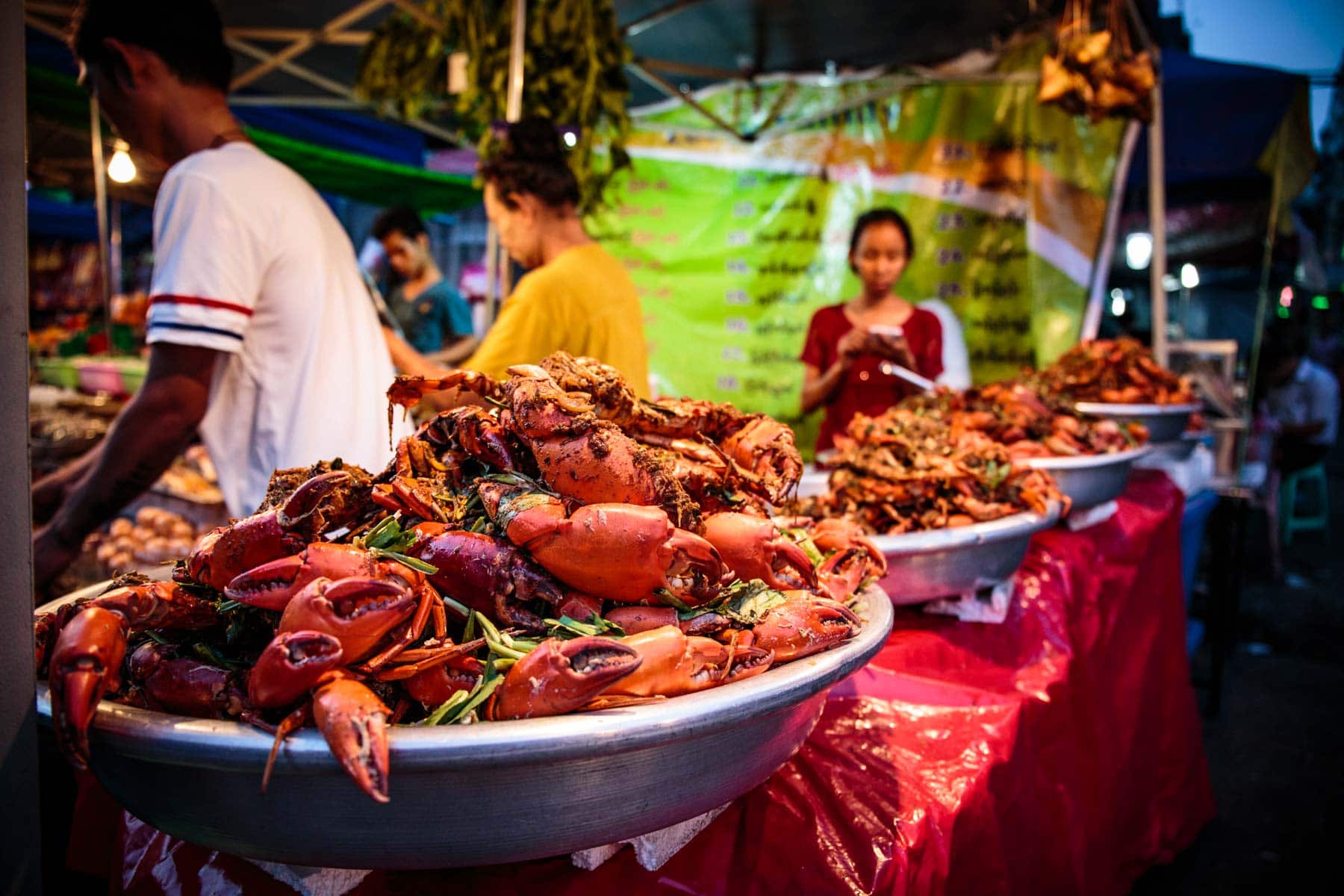 The first thing I noticed about food in Myanmar was quite simply how many dishes were brought out to us every time we sat down to eat. It didn’t matter whether what we had ordered, our meal always came with a side of about eight to 10 dishes.

Myanmar, or Burmese, food is heavily influenced by its neighbours – think China, India and Thailand – but with a taste all of its own, of course.

Unlike Indian meals, which are often vegetarian, meat is a delicacy in Myanmar and most meals, whether a curry, salad or soup, are served with some kind of meat.

But knowing what to eat can be tricky, it’s a cuisine that is not all that common outside of Myanmar, so here are our tips to help you navigate the menu with a little more confidence. 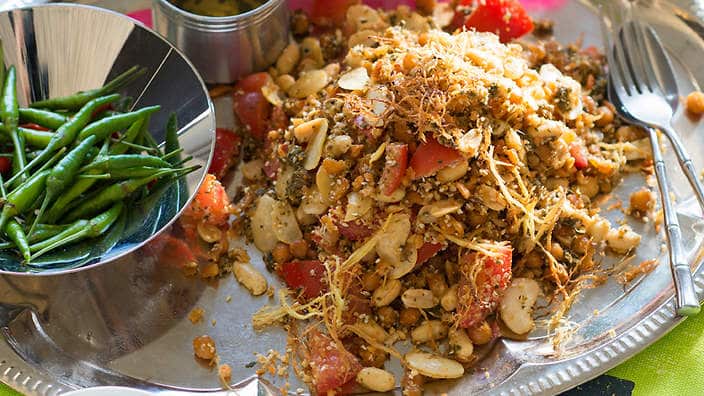 This is one of the most popular foods in Myanmar. Tea, yes tea, is used as a delicacy. You’ll see tea houses dotted throughout the country, and it’s worth stopping for a cup, of course, but Myanmar is also one of the few countries in the world where they use tea leaves to create a salad. The leaves are pickled and served with lima beans, chick peas, tomatoes, peanuts and ginger. 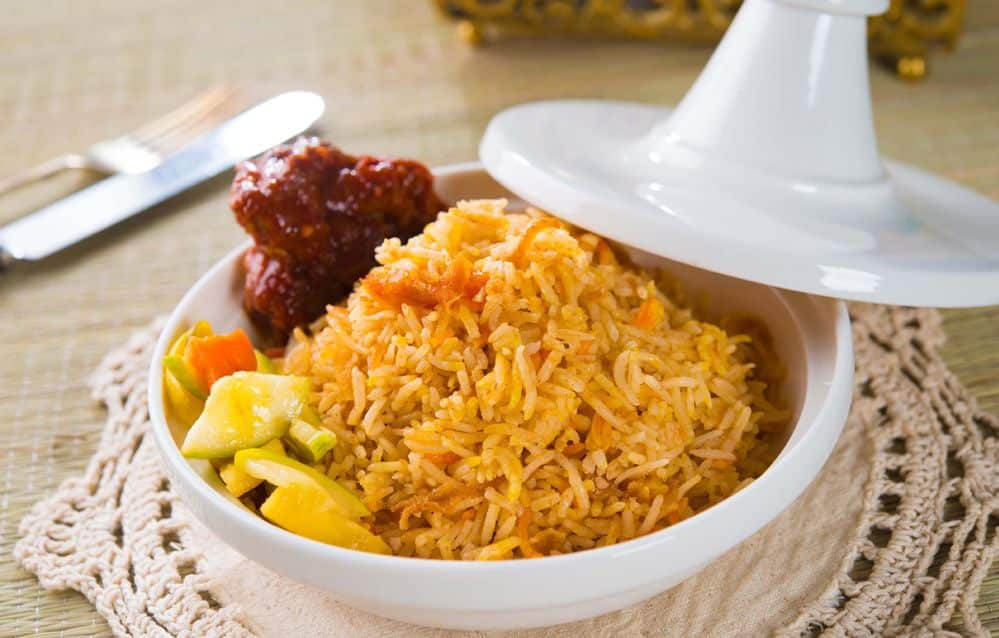 Served with fish, Shan Rice is a tasty side that will have you hooked. The fish is generally crispy and the rice cooked with saffron, roasted peanuts and seasonal vegetables. Unlike most of the rice dishes we eat in the west, Shan rice is quite oily.

It can be eaten as a snack, or with sides as part of a main meal in Myanmar.

Shan noodles are a national favourite. The sticky rice noodles are served with either chicken or pork, tomato puree, onions and spices and topped with vegetables. The noodles are often served at breakfast, but can be eaten throughout the day for a snack or side dish.

Mohinga is apparently the unofficial national dish, made from rice vermicelli with fish broth, onions, garlic, lemongrass and banana stem and served with boiled eggs and fish cakes.

It is usually eaten at breakfast and is considered a ‘street food’.

If you like Pho, you’ll probably be a fan of this too.

And since you’ll most likely be on holidays when you’re trying it, you really can eat it at any time of the day! 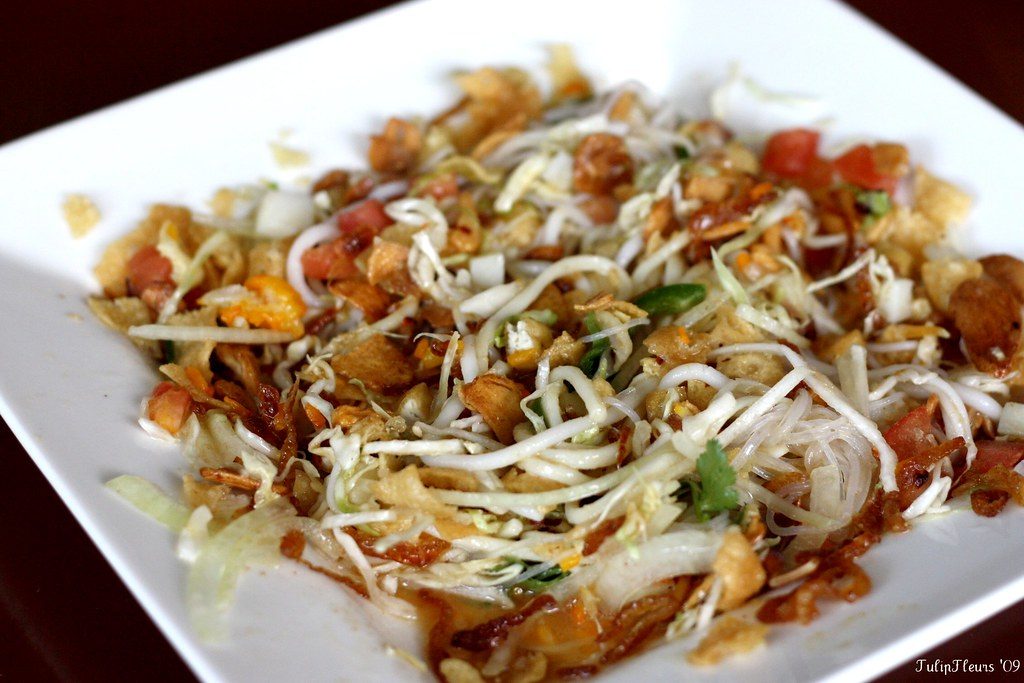 Ok, it may not sound delicious, but trust us this is one of the most popular salad dishes in Myanmar, one that’s worth trying while you’re there. 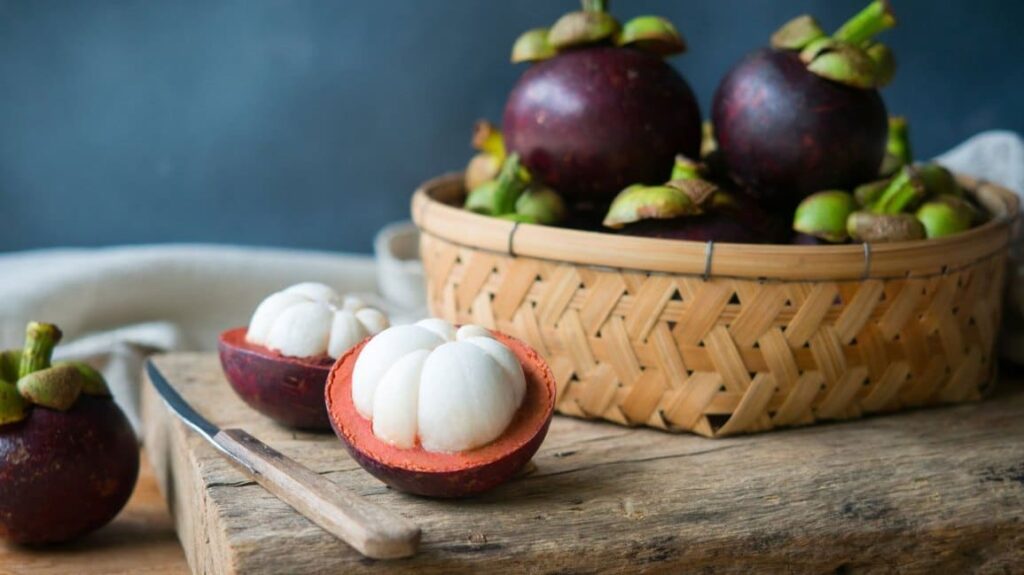 You can get mangsteen in other South East Asian countries, of course. It’s native to this part of the world and its exact roots aren’t known, but do try it while you’re in Myanmar.

The fruit is sweet and tangy, and quite juicy. Don’t eat the skin, instead peal out the centre like you would a rambutan.

Delicious after you’ve eaten all that curry, or simply need a sweet pick up during the day.

Feeling hungry and want to try the Burmese cuisine for yourself? Check out our Magical Myanmar tour here. 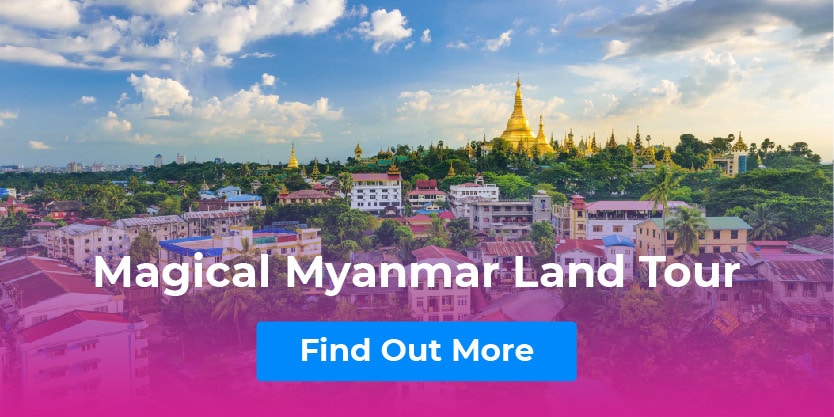 The trip was just great - I can't really think of any negatives. Diane will back me up when I say I usually give 10/10s - I gave her 20/10. Trish, Canada/Alaska

I found the overall trip excellent. I believe Diane's professionalism, inclusive personality and ability to relate to all contributed to this. She worked to ensure the group was cohesive without individuals impinging on the personal space of others etc. a good skill to have and one she applied effectively. Kate, Canada/Alaska

Fantastic value for money paid. Russell our guide is an asset to your company... he was fantastic! Overall the trip was magical from start to finish. Well done Two's a Crowd ... the best trip ever. Barbara, Canada/Alaska

I had a fantastic trip. Absolutely loved Canada and Alaska. It's the first time I have travelled solo and was pleasantly surprised to find a bunch of people that all got on so well. Diane our host was great. She did a good job of getting us altogether for meals, excursions, shopping trips etc. I liked that she quietly got things done without being loud or "in-your-face". She was good at being one of us as well as our leader. Wendy, Canada/Alaska

Had a great time. Good mixture of organised activities and spare time. Diane was an excellent tour host. Russell the tour guide was great, very knowledgeable and personable with his insights into growing up and living in Canada. Sharon, Canada/Alaska

The trip was well organised, with a good mix of activity and free time. The scenery was spectacular and fellow travellers were a great bunch. Diane is a excellent host - helpful, courteous and above all a pleasure to know. I found her bubbly personality a bonus and can only speak highly of her. Gary, Canada/Alaska

I had a fabulous time

I had a fabulous time. Lake Louise and the hotel were magnificent. The cruise was excellent. Diane made sure that she was available for group meals and sightseeing, and was alway in good humour and great fun. I would recommend your company to everyone and am very interested in the Scandinavia  tour at the end of 2017.

What a great trip! I experienced so much and participated in all that was offered. I had read and reviewed as much as time allowed me but was not prepared for what the trip gave me and that is a better understanding of the beautiful people of both countries. - Lesley on Vietnam/Cambodia

I thought the suggestions for optional things to do, in the "free" time were very good. So good, we really ended up with very little free time. So much to do! - Mary on Vietnam

I found the trip interesting and eye opening with a great overview of both Vietnam and Cambodia. The other travellers on the trip were fabulous and we had a great time together. - Anonymous on Vietnam/Cambodia

Extremely well organised with fabulous guides throughout - especially in Vietnam! First holiday with your company and certainly not the last. - Glenys on Vietnam

Great group to travel with

Having a small group meant that the days were more relaxed and flexible and I really felt spoilt and looked after. Melinda on Borneo

Thoroughly enjoyed my trip especially Uganda. There was so much variety of things to do on this trip. Jaros & Julius were great. Thought in Kenya the Maasai Mara were beautiful people, so easy to get along with. Judy

Can’t stop talking about my experience

I just feel so privileged to have shared with the Maasai the most awe-inspiring majestic sights and sounds of Africa. The fantastic memories will be with me forever. Maureen

Gillian was a fantastic host. She was there for us from the moment we reached Hotel Troy. Heather on Africa

Best holiday I’ve been on!

One of the best holidays that I have been on - really well organised. I would never have travelled to Vietnam or Cambodia on my own. Bronwyn

I found the trip interesting and eye opening with a great overview of both Vietnam and Cambodia. The other travellers on the trip were fabulous and we had a great time together.

Fabulous rapport filled with much humour!

A great bunch of people & I can't believe how we all had such a fabulous rapport filled with much humour!!!

I couldn’t fault anything.

The (Uniworld River) cruise was great, I met up with some wonderful people who treated me like part of the family !
The ship & crew were fantastic & the excursions were very good, I couldn't fault anything. I'd recommend this cruise to anyone.  Peter

The entire trip was one of the most enjoyable and exciting. Also so informative and educational. I was so pleased to make the trip. Wish I was over there in that magical place.  Marjorie

I’ve just returned from the wonderful Kimberley trip.  It was my first experience with Two’s a Crowd and I was delighted.  Kay

I have had the opportunity to experience things I would never had done by myself.  Solo travellers is a fantastic concept and use of social media has been a great way to share and keep in touch with friends and family. Judi

I need not have worried

Being my first tour and a senior member, I admit I was apprehensive but I need not have worried. It was great and I was very well looked after.  Can’t wait to go to Kenya with Two’s a Crowd.  Maureen

A memorable trip of a lifetime, a wish fulfilled.  A fascinating cultural country steeped in history which I found totally enthralling.  Two’s a Crowd service was smooth and seamless.  Pam

It was a wonderful experience visiting Cambodia and Vietnam and gave me a better understanding of these countries. I had a great time with new friends, we had a good bunch and Leonie was the perfect host. Eric

Value for money and outstanding co-operation from your staff and tour operators. Joan

Safe and secure and totally looked after

An awesome adventure for my first time overseas alone.  Leonie was excellent and both guides were also fantastic.  At all times I felt safe and secure and totally looked after.  Melinda

Leonie was an excellent host, the ideal person. I never felt any pressure to  be involved in every activity so I could explore alone during free time. Having 2 or 3 nights in most places was great – you could rest up or party. Well done Two’s a Crowd. Jenny

It was a nice surprise holiday, a completely different experience from all my other holidays. Thanks. Piroska

I’ve had at least 10 travel agents.

In my travelling life, I’ve had at least 10 travel agents.  Two’s a Crowd is the first one where I haven’t had to correct anything in my travel documents.   Piroska

I’m so excited to have found you Two’s a Crowd.

“Finally. A travel company is recognising the needs of people like me”

This is perfect for me.

“I’ve been to Burma but can you please send me some information about other destinations. This is perfect for me.”

I really wanted to meet the people behind it

“I saw your ad in the local paper and could have phoned but I wanted to come in and congratulate you on starting this great business. I really wanted to meet the people behind it.”

Two’s a Crowd on the internet was definitely meant to be!

I’m really enthusiastic about the niche you are determined to cover in the market, and have the feeling stumbling on Two’s a Crowd on the internet was definitely meant to be.

I find them inspirational

Thanks for sending these emails as I find them inspirational and will sit dreaming for the next hour or so.

Thank you for providing a service for people like me

“I am very excited to read about your area of speciality, and look forward to devouring all information that might come my way. Thank you for providing a service for people like me.”

The entire 14 days ran so smoothly from Two's a Crowd booking my flights to  airport transfers and then the 12 days camping in the Kimberley. Excellent throughout. Congratulations. Marjorie